While Right to Roam remains foreign to many in England, our neighbours in Europe and even in next door Scotland have been peacefully coexisting with the concept. Norway, Sweden and Estonia are exemplars; all have sensible, listed exceptions to the right, and incorporate strict ecological and community responsibilities.

In England, though, progress remains in flux, with political will in as limited supply as the land on which we can responsibly roam. While much of the Peak District now benefits from Right to Roam rules, only 8% of English land as a whole can say the same - and only 3% of inland water bodies. With the Government’s decision to shelve the publication of Lord Agnew’s Right to Roam report - commissioned to bring about ‘radical joined up thinking’ and explore ‘a quantum shift in how our society supports people to access and engage with the outdoors’ - the access issues from land division dating to the Norman era remain unresolved.

A recent Landscapes review included a section on Open Access Land alongside a suite of related measures aiming to police antisocial habits including car parking and recreational driving, and replace them with better sustainable transport options. But, aside from some soft-approach educational targets, engagement with nature continues to be minimal for many.

Projects like Who Owns England (together with its co-researcher Guy Shrubsole’s excellent book of the same title) have enabled a slightly clearer view of the murky world of landownership, but there is so much more to be charted. As planners, this would naturally help our job immeasurably, whether it’s for siting, routing, or resolving disputes.

With this in mind, to mark the 90th anniversary of the infamous Kinder mass trespass a group of friends and planners from RTPI North West decided to retrace its route. The mass trespass is widely credited with furthering the Right to Roam movement in the 1930s, which eventually led to legislation in 1949 to establish the National Parks and latterly the Countryside Rights of Way Act 2000. With ten years until the Kinder trespass centenary, will we finally see a shift?

“I may be a wage slave on Monday,” sang Ewan MacColl, folk singer and activist, in his homage to the action, ‘Manchester Rambler’. “But I am a free man on Sunday.”

As we set out towards William Clough in the footsteps of the intrepid activists with the words of our guide for the day - the local historian and writer David Toft from Hayfield Kinder Trespass Group - empowering every stride, we were free.

MacColl’s song, ‘The Manchester Rambler’, was inspired by the mass trespass of Kinder Scout. His lyrics touch on the issue of grouse hunting on the moorlands, and our other guest for the day - James Richardson, an ecologist at Wardell Armstrong LLP - explained the landscape and biodiversity impacts associated with land management practices in the Peaks area, whose bleak, heather-dominated scenery persists. In contrast, James painted a picture of the more varied landscape of woodland, heathland, and blanket bog, supporting a more biodiverse and climate-resilient ecosystem that could be achieved with regulation and ambition.

There have been initiatives to explore habitat restoration or natural regeneration, but the tension with traditional human incumbency remains, exemplified by Mark Spencer MP’s insistence that “the countryside is a business”, in response to hushing the Agnew report. One vocal dissenter of Spencer’s logic, Caroline Lucas MP, joined our walk after staying in Hayfield following her keynote presentation as part of the Trespass Group’s festivities the previous day.

In the spirit of Ewan MacColl, David's final words before we set off were those of his poem: 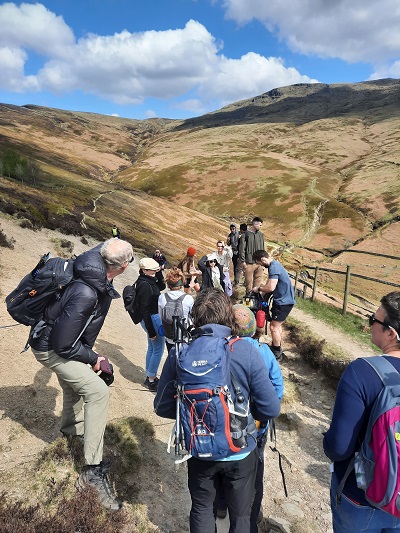 To these slopes
Here on the sides of this great and ancient plateau’s edge,
Where the curlew sings on a summer's day
Its solitary, swooping note
Like a crystal drop of Kinder water -
A song far sweeter
Than any music humans ever made -
The walkers came
To claim for all who'd follow
The right to hear that song
To breathe that air with smog-bruised lungs
To taste the sweetness of the open space
To pause a moment from the draining race
Of hard industrial existence

And they called those walkers 'trespassers'
As if by claiming back these stolen treasures
By repossessing all these hard won pleasures
It was they who were the criminals.

But when you climb up Kinder now

And feel your legs strain hard against the earth
And fill your lungs with fresh free air
And watch the long white hare
Kicking its legs in the very ecstasy of life
Remember there are those who would have kept this from us
And those who even now would, if they could
Keep us from the silver stream and open moor
And windswept wood.

If you are interested rural planning you might also want to read Rural Planning in the 2020s, the RTPI’s latest research report.

Michael Chang: Leveraging the power of planning to help level up health and wellbeing

Chris Stapleton: Why are soils neglected?

Addressing the challenges of short-term lets and second homes