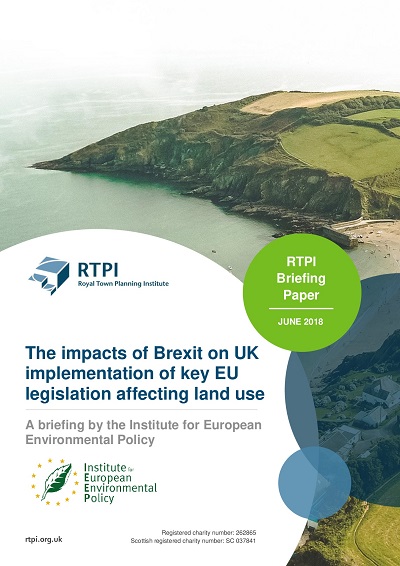 EU environmental legislation impacts on land use and land use planning in the UK are wide ranging, and have over time become embedded in domestic legislation and practice. The scope for a radical overhaul of the affected areas will depend on the extent of any obligations the UK enters into under a future relationship agreement (and under any transitional agreement); but also, significantly, on the central government resources devoted to taking advantage of any additional flexibility, and the political and market appetite for regulatory change.

Given Ministerial statements on the UK’s commitment to high environmental standards, it can be expected that any regulatory change would be focused on process requirements. The appetite for regulatory change will be affected by the politics around Brexit, and (under the current administration) by internal party dynamics, and in particular the enthusiasm for part of the Parliamentary Conservative Party to present Brexit as a rejection of excessive government intervention. If predictions of economic damage from the UK’s departure are borne out by events, then there would be strong pressure to simplify regulation, aiming for what would be presented as a red tape reduction boost to growth. Moreover, if (as seems likely) the economic downsides to Brexit are greater in the event of less UK access to the EU27 market, that limited access is likely to be accompanied by greater flexibility to diverge in regulatory terms.

An additional element in the future stringency of implementation of environmental standards in the UK is the governance regimes applied, in the form of, on the one hand, dispute resolution mechanisms in any agreement on the future relationship between the UK and the EU, and, on the other hand, the UK’s own domestic governance, where, as noted above, Michael Gove has suggested that a strengthening may be required to reflect the removal of the role of the European Commission and the European Court of Justice. In general, bilateral dispute resolution mechanisms in international trade agreements tend to have limited impact. The parties to an agreement generally have a mutual interest in ensuring that it continues to operate. The extent of the issues where the UK argues that robust dispute resolution procedures will be needed suggest there may be some appetite for supranational mechanisms to be considered, but this is unlikely.

Understanding the implications of Britain's exit from the European Union is a key concern for planners. This briefing paper maps the relevant directives and regulations affecting land use, and their applicability to different outcomes of the Brexit process. Published in conjunction with Institute for European Environmental Policy (IEEP).

Rural Planning in the 2020s