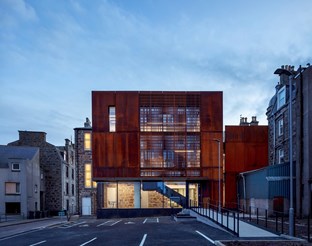 A landmark regeneration scheme in Fraserburgh, Aberdeenshire has been crowned the overall winner at the inaugural RTPI Scotland Awards for Planning Excellence 2022.

The Fraserburgh Conservation Area Renewal Scheme Townscape Heritage Project won in the RTPI Scotland Best Project category and took away the overall Award for Planning Excellence at the ceremony in Edinburgh on 16 June.

Aberdeenshire council picked up their award with an innovative heritage led regeneration scheme. The approach used the built heritage of the town as a means to catalyse, not constrain, the economic development and economic growth of the area.

The scheme has targeted properties in the Fraserburgh Conservation Area that were derelict, vacant, or both, to bring them back into active use. This included shopfront improvements, reinstatement of original architectural detail, public realm and an extensive training and engagement programme.

The RTPI Scotland Awards for Planning Excellence celebrates outstanding plans, projects and people that demonstrate the power of planning. Other winners on the night included Planner Rhiannon Moore of Montagu Evens who scooped the prize for Young Planner of the Year, and planning consultancy Kevin Murray Associates, who won Small Planning Consultancy of the Year.

Jacobs were awarded the top accolade for their Edinburgh City Centre Transformation Programme in the Plan-Making category.

Craig McLaren, Chair of the Judging Panel said, “Conservation and historic buildings are often seen a constraint on development and economic growth. The judges were extremely impressed with the way this project ‘flipped’ that idea to become a key asset for the reinvention of the town.

“Fraserburgh has not always been seen as a "pretty" place, and the changes that have been delivered are welcomed and significant. Planning and investment in the historic fabric were seen as catalysts to focus on a few key sites whilst delivering training and establishing an enterprise hub. The judges saw how they were already making a remarkable difference to the town and its people and the belief in its future.”