Bernadette Hillman: COP26 has created a huge sense of purpose

Bernadette Hillman is a partner and Head of Planning at Sharpe Pritchard. She is Honorary Solicitor and Climate Change Champion for the RTPI and sits on the Board of Trustees.

COP26 has generated a huge sense of purpose and a cohesive sense of direction. Coming to the conference in its second week, after all the national media coverage showing world leaders, former presidents and influential celebrities making their pledges was inspiring and hugely exciting. It was in that context and with that background that I moved through the Green Zone events at COP26.

Bernadette arrives at the summit

The media criticism of the first week was that this COP had been too English/British centric; too old white men centric. But that is not what I saw or sensed in the Green Zone.

I could see and feel the energetic momentum which had been created and simply by being there and listening as well as chatting to other delegates in the breaks, it was clear to me that there was a cohesive sense of direction from and by all nationalities/all genders and all generations. Some of the speakers and panellists were phenomenal; clearly leaders of the future giving us the sense of being in very safe hands.

In some of my talks e.g. on gender and a just transition there was, surprisingly, no mention at all of Planning and why that discipline is so important to ensure we have equitable towns cities and that vulnerable and marginalised communities are accommodated.

Aside from this, all of the events had energy, enthusiasm and the real sense that change will and can happen with collaboration, and the desire to do so much more amongst all disciplines, all nationalities, and all ages, with the issue of the Glasgow Accord.

First the RTPI showcase event, which was effectively a masterclass in the global role planners can and should play in the race to Net Zero. Planners need to change ways in which we plan cities to bring parity to the race to Net Zero. Our keynote speaker, her excellency Maimunah Mohd Sarif, spoke so eloquently about the importance of planning in tackling the climate crisis. We have the opportunity to bring parity to that race and help communities that most need help through a collaborative approach. We as planners must ensure that we are planning equitable cities. We must be cognisant that so few vulnerable and marginalised communities are represented within our profession and proceed accordingly.

This message and its themes carried through into the next day where the main topic was gender science and innovation. If you are on the top deck of the ship or the lower decks, if the ship sinks, we will all sink…

On Transport Day at COP26 I attended the event entitled: Speeding up the transport revolution, joining key global voices in policy, industry and civil society organised by the Global movement Count Us In. 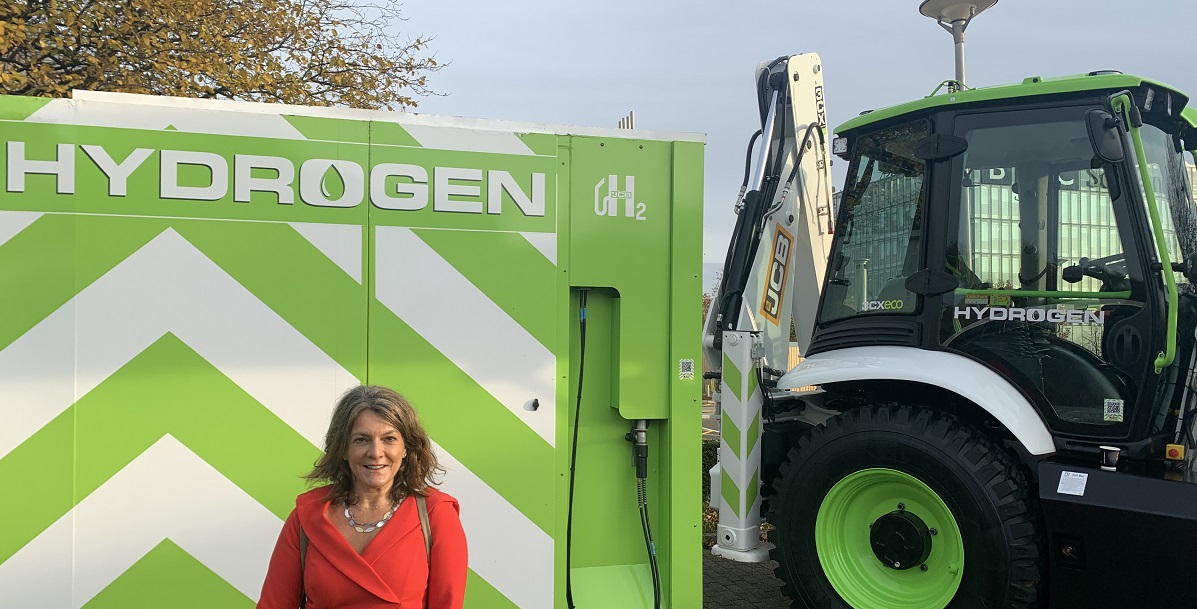 Bernadette takes a look at some of the innovative transport solutions

Road transport contributes to 75% of the global emissions associated with transportation. It is a big driver of climate change and early deaths due to pollution. Yet many exciting, clean, fossil-free technologies are already available and economically feasible.  What’s missing? Ambitious policies, investment, incentives and high-level actions to drive the adoption of clean energy solutions, faster. The message to policy makers is “step on the accelerator to bid the combustion engine farewell”.

The Construction Industry Council (CIC)’s event: Construction: The Built Environment, showed us the importance of carbon zero construction activity and led with the news that progress had been made. It’s ‘Carbon Zero: the professional institutions’ climate action plan’, which was spearheaded by CIC’s Climate Change Panel, has now reached 40 signatories.

CIC’s Deputy Chair and Chair of the Climate Change Panel Stephen Hodder discussed the Action Plan as part of the Construction Leadership Council’s presentation. The speakers were dynamic, thoughtful and inspiring. We must not ask why but how can we make the essential changes need to be carbon free.  In planning terms, buildings need to be shown to be carbon neutral at the pre application stage so that the development is clearly carbon neutral from the outset.