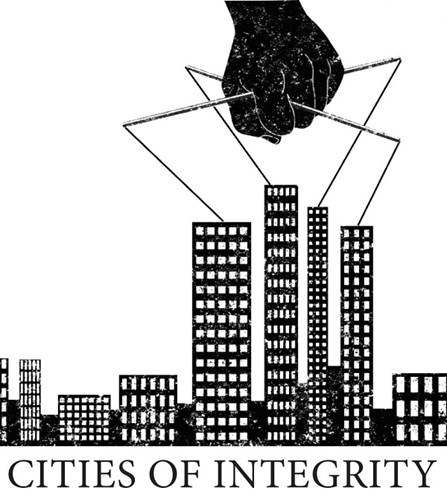 With the ever-increasing rise and importance of cities globally, the planning profession plays a critical role in ensuring that urban environments meet the needs of a majority of the world’s inhabitants. Yet the same wealth and economic opportunities created by cities can also invite opportunistic behaviour and corruption into the urban development process, placing planners in the midst of decisions with high economic stakes and exposing them to pressure or temptation to act illicitly in furtherance of private gain.

According to a survey conducted amongst planning professionals in South Africa and Zambia as part of the ‘Cities of Integrity’ project, nearly half of all South African (46%) and almost three-quarter of Zambian (73%) respondents had been asked to violate rules, policies or procedures in order to achieve a particular planning outcome, at least on occasion. In South Africa, over a third (37%) had already been asked at least once to manufacture a pre-ordained outcome that benefited particular officials or private parties, a number that climbed to 72% in Zambia, where more than half of the planners also indicated that they had been offered bribes.

Although planners are only one role-player in the broader networks that facilitate urban development, given their fiduciary duties they arguably play a pivotal role in facilitating, permitting, or challenging corruption in public decision-making. However, until now little research has been conducted on the complex relationship between planning and corruption, and still less on how emphasising the professional identities of planners might help address corruption and increase transparency in urban development. Much of the present research and action on urban corruption focuses on punitive or prescriptive methods to ensure compliance with the law and ethical service standards. Meanwhile, most training efforts have focused more on individual conduct or organisation-wide behaviour.

In the ‘Cities of Integrity’ project, funded by UKAid and part of the Global Integrity Anti-Corruption Evidence (GI-ACE) Programme, we take a fresh approach, focusing on how leveraging professional networks and associations to promote a professional identity founded on integrity might provide the support planners need to navigate ethical challenges and stand up against corruption. Therefore, over the past two years the University of Cape Town’s African Centre for Cities and the University of Zambia’s Center for Urban Research and Planning have worked closely with planning and urban development professionals in Zambia and South Africa, as well as their statutory planning bodies. The two countries provide a context well-suited to engage with the topic, both having rapidly urbanising populations, high reported perceptions of corruption, as well as legally mandated planning profession bodies. To understand the specific challenges and opportunities regarding mitigating urban corruption, we incorporated both standard social science research techniques (e.g. interviews, focus groups and surveys), as well as more experimental and innovative inquiries and public interventions, including a Qualitative Action Experiment in Zambia and an animated video series on corruption and planning.

In early 2020, we conducted a countrywide survey of planning and urban development professionals in both countries. Around one hundred professionals responded from each country. While the survey is non-representative in relation to the overall number of professional planners in both countries, it still provides pertinent insights on day-to-day ethical challenges in the sector, as well as the potential benefits of promoting professional integrity.

Unsurprisingly, professionals in both countries registered high perceptions of corruption in urban development processes. More than half of the respondents (53%) indicated that contracting and procurement rules were not properly followed to benefit particular interests at least occasionally, and a similar number (54%) indicated that colleagues, superiors, or senior officials at least occasionally had a personal interest in activities for which they had oversight.

The good news is that a large majority of respondents in both South African and Zambia voiced a strong sense of public purpose and believed that integrity still played an important role in the profession. Similar majorities responded that they believed their respective planning associations could and should play a more central role in addressing corruption and promoting integrity.

Two notable patterns emerged that suggest that promoting professional integrity might be a key lever in combating corruption: First, while a sizeable minority of respondents reported commonly experiencing or perceiving corruption or irregularities, another larger proportion of respondents reported that such incidents only occur occasionally or sometimes (see Figure 2), suggesting that their experience of corruption could be characterised as opportunistic or situational. 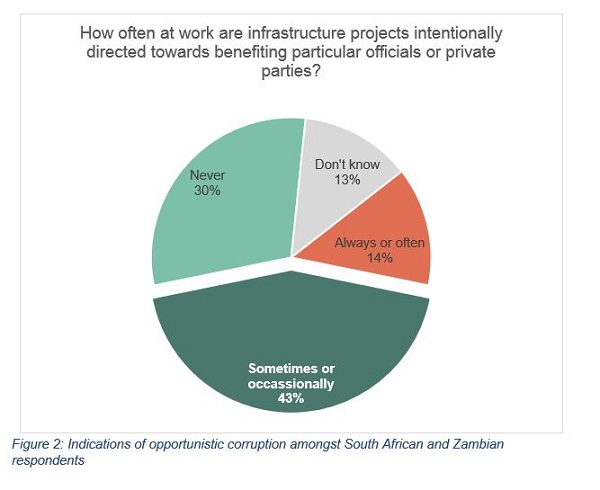 Second, while a large majority of respondents in both countries did not believe that planners in general were likely to report corruption, a similarly large number indicated that they themselves were at least somewhat likely to report corruption and unethical behaviour (see Figure 3). These results might be explained by the fact that more ethical respondents self-selected to take a survey on ethics, or that respondents overestimated their own ethical behaviour (a common phenomenon in anti-corruption research). However, the extent of the discrepancy in responses could also suggest “pluralistic ignorance” amongst respondents, a phenomenon wherein most individuals in a group conform to social norm (here, not reporting corruption) even though they privately disagree with it, because they (incorrectly) believe that most other individuals support that social norm. If the latter is true, the phenomenon could be effectively countered through increased knowledge-sharing and discourse regarding perceptions of corruption and reporting, e.g. through awareness campaigns and more diverse and low-threshold reporting mechanisms. Professional associations would be well-placed to take a lead role in implementing such strategies. 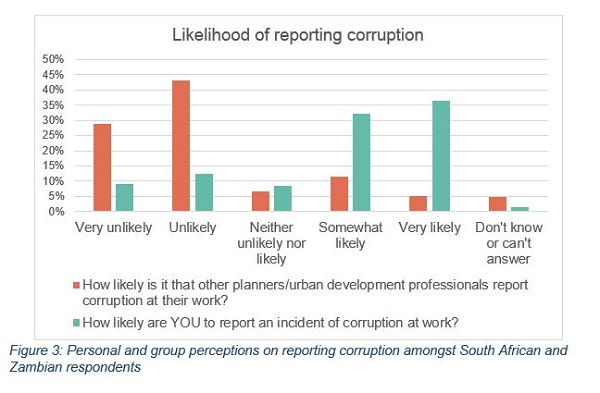 While our research focused on South Africa and Zambia, we believe that our findings are also instructive for professional planners well beyond Southern Africa. Urban corruption is, after all, a global problem, and one does not have to look much further than London’s “3bn GBP ghost mansions” to see how illicit transactions and corruption can drain the life from entire neighbourhoods. Our research suggests that there is a strong opportunity to leverage professional networks more effectively in order to support planners as ‘hidden champions’ of urban integrity.

Christian Alexander is a researcher for the Cities of Integrity Project at the African Centre for Cities, University of Cape Town.

Dr. Laura Nkula-Wenz is a lecturer and researcher at the African Centre for Cities, University of Cape Town. She is the project coordinator for 'Cities of Integrity'.

Vanessa Watson is Emeritus Professor of City Planning in the School of Architecture, Planning and Geomatics and a founder of the African Centre for Cities, University of Cape Town, South Africa. She is the PI of the planning and corruption project.

Tim Smith: My six years on the Conduct and Discipline Panel

Are planning enforcement teams under threat?