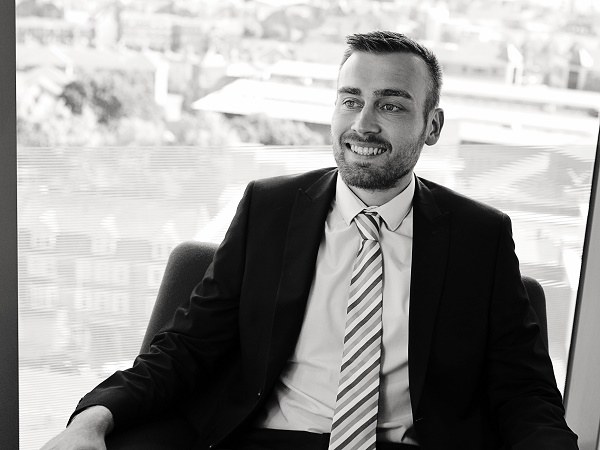 Avid readers of the RTPI blogs may recall that last week I published a blog on the book by Jane Jacobs: The Death and Life of Great American Cities, where I set myself the goal of thinking critically about whether the content would be applicable today.

In this follow up blog post I want to share one of the key outcomes that I took away from the book, specifically about parks and open spaces, and apply this to a couple of examples in my local town of Stowmarket, Suffolk.

The Covid-19 pandemic has highlighted the importance of providing high quality and large enough public open spaces for us to enjoy. No more was this apparent than in the first lockdown when the weather was pleasant and people craved the ability to experience the outdoors. This was particularly so for those in urban environments and in flats where private outdoor amenity space is a luxury. Parks and open spaces also served as the social meeting space for much of society in the absence of traditional face-to-face meeting places, allowing people to communicate without staring at a screen or having their emotions literally masked by face-masks inside.

Sentiment among the planning profession has been that clearly, pandemic or no pandemic, we need to give greater emphasis to increasing the proportion of public open space and improving its availability to residents. Traditionally in spatial planning the overriding metrics are quantitative, typically the sizes of open space on a hectare per person basis and assessing the deficiencies of specific forms of open space (e.g. young people’s play areas, allotments, skate parks etc).

However, one aspect that is sometimes overlooked is how the open space will be used. Jacobs quotes a journalist, who lives at Rittenhouse Square in Philadelphia, who really exemplifies the animation of the park throughout a typical day:

First, a few early-bird walkers who live beside the park take brisk strolls. They are shortly joined, and followed, by residents who cross the park on their way to work out of the district. Next come people from outside the district, crossing the park on their way to work within the neighbourhood. Soon after these people have left the square the errand-goers start to come through, many of them lingering, and in mid-morning mothers and small children come in, along with an increasing number of shoppers. Before noon the mothers and children leave, but the square’s population continues to grow because of employees on their lunch hour and also because of people coming from elsewhere to lunch at the art club and the other restaurants around. In the afternoon mothers and children turn up again, the shoppers and errand goers linger longer, and school children eventually add themselves in. In the later afternoon the mothers have left but the homeward-bound workers come through - first those leaving the neighbourhood, and then those returning to it. Some of these linger. From then on into the evening the square gets many young people on dates, some who are dining out nearby, some who live nearby, some who seem to come just because of the nice combination of liveliness and leisure. All through the day, there is a sprinkling of old people with time on their hands, some people who are indigent, and various unidentified idlers.

To anyone who has visited Cambridge, the above will feel resemblant to Parker’s Piece. You could effectively write your own diary of comings and goings idling there as it serves: commuters, tourists, students, school activities, residents and much more. The key point that Jacobs illustrates in the Philadelphia case is that the park is successful because of the variety of users that rely on it, and significantly, how they are spread throughout the day. In contrast, she refers to Washington Square, also in Philadelphia, as a bad example due to the fact that it is situated in a solely office district. Consequently it only has office workers to draw upon and is under-monitored and under-used for the remainder of the day.

In thinking critically about how we might learn from this lesson and apply it ‘across the pond’, it does pose a cautionary tale for the recent Use Class Order and Permitted Development changes that have been introduced, as well as those in the pipeline for the future. For example, flipping the negative example highlighted by Jacobs on its axis, if large swathes of offices, shops and other town centre uses are given over to residential, what will become of town and city centre parks during lunch hours and the busy morning and evening commutes of those who pass through them when these uses are vacated? On the other end of the scale, how ‘sustainable’ will Sustainable Urban Extensions really be if the open spaces provided on site are only really created for a critical mass of just the new residents? Yes, there are often small local and district centres included in these, but will they alone be sufficient to provide the variety of users that these new open spaces crave?

I ventured out to a couple of examples of parks in my local town of Stowmarket, Suffolk to put this lesson into action.

The first, Pikes Meadow, lacks the variety in type and critical mass of surrounding uses to incentivise effective footfall through the park throughout the day. The petrol station for example is clearly car orientated and none of the nearby uses really help drive footfall, meaning the only reason to go through the park is to visit the park itself. This is exacerbated by the harsh road layout and volume of traffic surrounding the area, in turn requiring a physical fence along the boundary. Collectively this severely hinders permeability through the park. 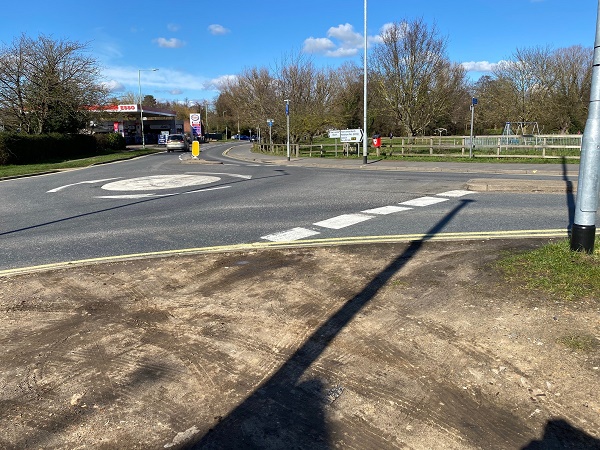 In addition, where there are pedestrian/ cycle links these are not well coordinated with the adjacent areas. The fact that there is no lighting also restricts use to the daytime, however this may be for ecological reasons given the proximity to the river and nature area. 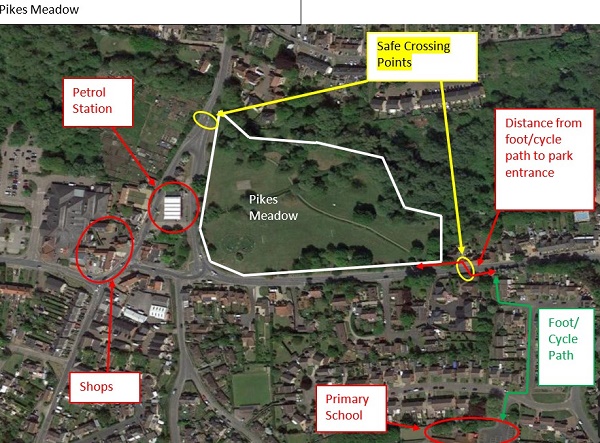 In contrast the Recreation Ground benefits from its position spatially as an active travel intersection for comings and goings. It takes advantage of this by providing a spoke of paths, connecting people to the town centre, high school, leisure centre and doctor’s surgery, and, significantly, these paths seamlessly flow into the nearby pedestrian and cycle networks. Furthermore, unlike Pikes Meadow, the park feels noticeably more permeable and intimate with its surroundings, due in large part due to the lack of a hard boundary along much of its edge and lower levels of vehicle traffic around it. 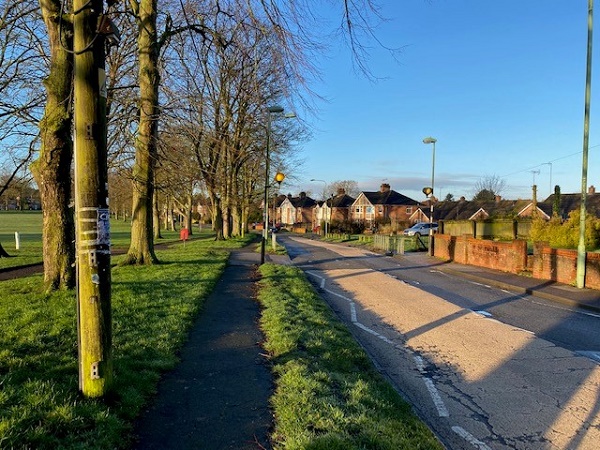 The nearby uses provide a constant buzz of activity spread across a considerable portion of the day. For example people:

The former middle school also used to operate immediately adjacent to the park which provided even greater use of this open space. However this closed in 2015 following the change to the two-tier education system in Suffolk and is due to be developed as affordable housing in the short term. 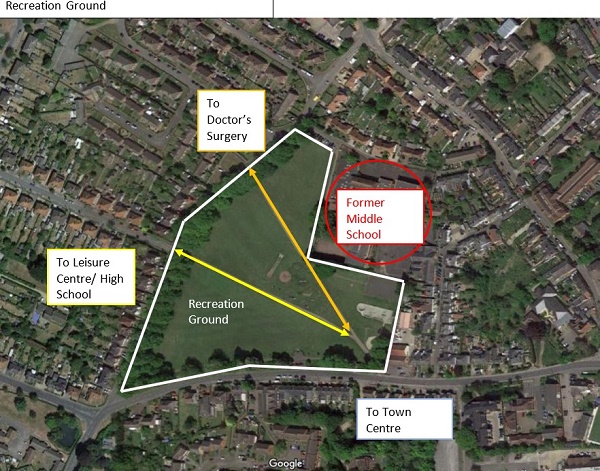 Perhaps the Planning for the Future White Paper and the transition to American-style zoning offers an opportunity for planners to improve existing parks and use them to justify a greater diversity of uses in urban areas. For example, streets bordering successful parks, and not just the parks themselves, could be zoned for “protection” on the basis that the existing mix of uses are necessary in order for the park to effectively serve its local users. Where there are examples of parks suffering from anti-social behaviour or are under-utilised throughout the day, this could advocate a “renewal” zone that supports certain changes of use to encourage uses that are currently absent in the surrounding area but are needed to improve the park.

One over-arching lesson from The Death and Life of Great American Cities is to sometimes stop thinking along the lines of “when developed, how will this area function in five, ten or fifteen years’ time”, but instead to simply think “when developed, how will this area function on a typical day?” This applies not just to parks, but to how the spectrum of different uses and people that makeup a place function.

Michael Hammond MRTPI is a Senior Planning Officer in the Planning Policy Team at Ipswich Borough Council. He graduated from Sheffield Hallam University in 2014 with a Masters’ degree in Town Planning. He has been a Chartered Member of the RTPI since 2017.

Don’t stop me now! Why virtual planning meetings must continue