RTPI’s research on the Location of Development considers the location of new housing development in relation to existing infrastructure.

The country faces a number of long-term challenges. Many towns and cities lag have low levels of economic productivity, and the benefits of growth are spread unevenly across society. An ageing population is putting our healthcare systems under strain, while problems like obesity and air pollution are on the rise. Meanwhile, climate change is creating new environmental risks, and making radical emissions reductions ever more necessary. Much of the country is also in the grip of a housing crisis.

The national debate around planning and housing tends to focus on three criteria: the number of houses granted permission, the speed at which they are built, and the affordability of the finished product. There is a wealth of data on each of these metrics, and these are increasingly used to measure the effectiveness of the planning system.

But while these are important criteria, they form just part of the picture. Planning is about delivering sustainable development, not just housing numbers. That is why the National Planning Policy Framework (NPPF) includes a wide range of economic, social and environmental objectives which include boosting economic growth, promoting sustainable transport, tackling climate change and improving public health.

Planning can help to deliver these objectives by looking at the big picture and ensuring that new development supports sustainable settlement patterns and urban form. But when it comes to measuring progress, there is little public data and spatial analysis to show the location and scale of new development.

Without this data, is it hard to understand whether planning policy is really delivering sustainable development.
Our research on this topic includes a literature review of what constitutes sustainable settlement patterns, and a process of mapping new development in relation to existing infrastructure.

What does the analysis show?

Given the significance of these spatial relationships, the RTPI commissioned Hatch to help us gain a better understanding of changing settlement patterns and urban form in twelve fast-growing English city-regions.

Using EGi data, the study mapped planning permissions for over 226,000 new houses granted between 2012 and 2017, focusing on major schemes of 50 or more units. It measured the size of each scheme and its relationship to the existing built-up area, and analysed proximity to major employment clusters and key public transport nodes - just some of the factors that make for a sustainable location.

The study was divided into two rounds. The first ran from January 2012 to September 2015, and the second from October 2015 to September 2017. Across both studies, we found that new housing is being located relatively close to jobs, with 74% of permissions within 10km of a major employment cluster. However, we found that over half of the houses permitted are not within easy walking or cycling distance of a railway, metro or underground station.

Snapshot: Is the NPPF delivering housing in the right places? (click to expand)

A more detailed set of findings can be viewed in the infographic below. This lists the city-regions covered by the study, the average number of permissions granted per month, the scale of development, and the spatial analysis to jobs and railway stations. 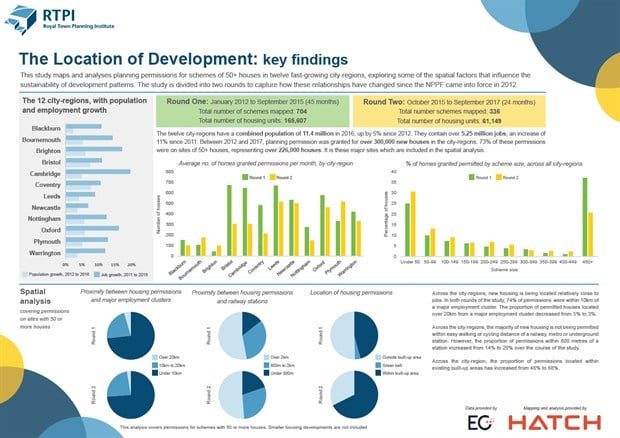 If you would like to understand more about this study then click here to download the methodology. The study was carried out by Hatch, using data from EGi.

Here you can download an A3 infographic with key data, maps and spatial analysis for each of the city-regions included in the study:

Why does location matter?

To accompany this study, the RTPI has published a literature review on the relationship between settlement patterns, urban form and sustainability. This describes how:

The original Location of Development study was carried out by GVA. The main report was published in March 2016. This was followed by three in-depth reports for the South West, South East and North West RTPI regions, which have kindly sponsored the research. These combine the data, mapping and analysis for their respective city-regions with commentary from roundtable discussions where our members examined the findings and discussed local factors shaping the distribution and sustainability of permissions.