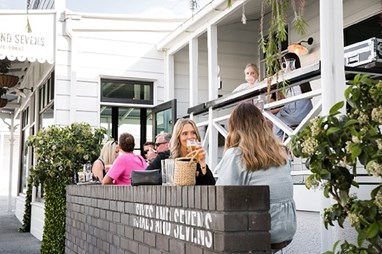 The idea of ‘fifteen minute cities’ - sometimes known as 20 minute neighbourhoods - needs little introduction. A utopian vision of local living, it is writ large as today’s most popular planning paradigm. The concept is strongly associated with Sorbonne professor Carlos Moreno, and even Paris’ socialist mayor Anne Hidalgo has promised to deliver on it. There are some excellent blogs from the RTPI on the topic, as well as others, including here, and a wider paper on the implications of 20 minute neighbourhoods in Scotland here, but this post tries to unpick some of the contradictions in the context of UK planning and oncoming government reforms, particularly in London.

In the UK, planning has often concerned itself with the idea of a settlement hierarchy, particularly with regards to retail, leisure and other town centre functions. This focus on the hierarchical role of district and local centres, assigning different retail policies to each to reinforce their separate statuses, and seeking to protect the higher level functions (whether large shopping units or nighttime economy or other uses) in town centres, has often actively prevent some uses from coming forward outside of their boundaries. In London, this hierarchy (Annex 1 of the London Plan) contains 6 different levels of centre, including local and neighbourhood centres with supermarkets of up to 500 sqm.

While the 15 minute neighbourhood concept recognises that the 15 minute walking radius relates primarily to ‘daily needs’, beyond what might be termed convenience retail and topup shopping it seems to present a direct challenge to planners' conception of the retail and town centre hierarchy. Or at the very least the need to significantly reframe it. This is particularly true in London where a mixture of uses is relatively viable even outside of traditional high streets and town centres. It is natural, after all, to take a longer journey for a slightly better array of goods, whether clothing or household goods, and whether that means Oxford Street or Westfield.

Service planning in other areas such as the NHS also have the potential to run counter to the 15 minute model. Many commissioning groups, though moving to new models of integrated commissioning and care, are centralising provision and moving away from hub and spoke models which are costlier to run. Other public services, including many of those run by councils such as libraries, face similar challenges, with consolidation often the key driving force behind decisions around facilities and their locations. The principle of local access is undoubtedly a positive one, but planners shouldn’t be promising omniscient control of all organs of government and local services.

And then there is green space. Many Local Plans contain open space standards for new development - often based on Fields in Trust’s 2.4 hectare standard per 1,000 population. No doubt these were inspired by Abercrombie’s 1944 plan for London, but the gift of clearing vast swathes of Victorian terraces and factories to create new open spaces, which that plan achieved, does not lie with most of today’s planners. Abercrombie made huge strides in bringing local areas up to his 4 acre standard of open space per 1,000 population, but enhancing local park provision today to ensure 15 minute access to play spaces or other facilities is typically a matter for developer contributions funding, or indeed not about physical provision per se. Plus, many 20th century suburbs were designed primarily to provide access to open space alongside private gardens, in the process dropping to densities which are too low to support other amenities such as shops. This demonstrates how different local amenity objectives can cut across one another.

In its guide to the topic, the TCPA states that "implementation is likely to be easier in settlements that pre-date the 20th century, which were created in an era when most journeys were made on foot and development was compact." - and yet just 20% of homes in Britain today were built before 1919. If 15 minute cities are to be equitably implemented, we need to understand how to apply the concept to existing 20th century neighbourhoods.

And then there is the wider issue of transport planning, including cycling infrastructure and the walkability of new and existing places. While London-wide guidance now requires route legibility assessments which provide photographic evidence of how active travel routes link to development sites, it is not entirely clear what the wider role of transport planning is in achieving 15 minutes cities for London, except to improve public transport more generally.

And here is where the biggest issue of all lies with the 15 minute city - for much of the past 30 years, there has been a particularly dominant idea in the UK and indeed planning globally: agglomeration. Agglomeration suggests that economic activity (read: jobs) clusters into cities, which become larger and larger and more productive as they grow. While this has led to much greater urban living in recent years, average commutes have continued to increase over the past decade.

Reports of home and digital working, and of small scale manufacturing and local production, go against this wider trend. How much will Covid-19, and the work of planners operating under the banner of the 15 minute city really change this economic reality, particularly for London which has been its primary beneficiary in recent years, decades of decentralisation and deagglomeration policy notwithstanding? It is true that the pandemic points towards a reduction long term in commuting, and more local activities, including shopping and leisure, and there is undoubtedly an opportunity to capitalise on this shift.

But while the principle of strong local service provision and walkable neighbourhood units has been influential in planning for over a century, it may well represent a challenge to many existing planning paradigms.